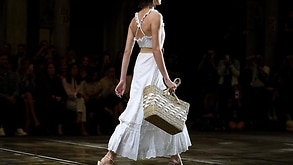 After 17 years, Tigerlily returned to Fashion Week in Sydney, but there was a noticeable absence from the Australian label on the runway.

Famous for its itsy-bitsy bikinis and whimsical beach-babe attire, the brand chose not to feature swimwear in its resort 2020 show at Sydney’s Carriageworks on Monday.

Instead, the focus was firmly on fashion.

A new line of accessories including teeny-tiny purses and vintage-inspired wooden handbags were also shown for the first time.

CEO Chris Buchanan says it was a conscious decision to showcase a “more elevated offering” at Fashion Week, in part to dispel a common myth about the brand.

“Tigerlily is one of Australia’s most admired and respected brands, however, a common misconception is that Tigerlily offers swimwear only,” he told AAP before the show.

“In fact, 80 per cent of the brand’s sales come from apparel.”

He said it made sense to return to the Fashion Week runway on the eve of the brand’s 20th birthday.

“In brand terms, it is a renaissance. We felt the time was right to return to the catwalk,” he said.

Bec + Bridge, which has developed a cult following with celebrities including the Kardashian-Jenner clan, Bella and Gigi Hadid, Hailey Bieber and Selena Gomez, showcased a collection inspired by the 1960s and 70s surf culture.

In what was likely a first for Fashion Week, models including Bambi Northwood-Blyth strutted down a shag carpeted runway in flares, slinky dresses and Hawaiian-inspired prints.

Activewear label P.E Nation, meanwhile, drew gasps from the audience when it showered models in water while unveiling its swimwear collaboration with Speedo.

The afternoon schedule continues with US designer Jonathan Simkhai and Bassike.

Simkhai, who usually shows at New York Fashion Week, said Australia was the “perfect place” for his first show outside of the States.

“This collection was inspired by the colours of Bondi sunsets and my favourite time of day – during the magic hour when the sun is painted in beautiful colours and I’m surrounded by my loved ones,” he told AAP.