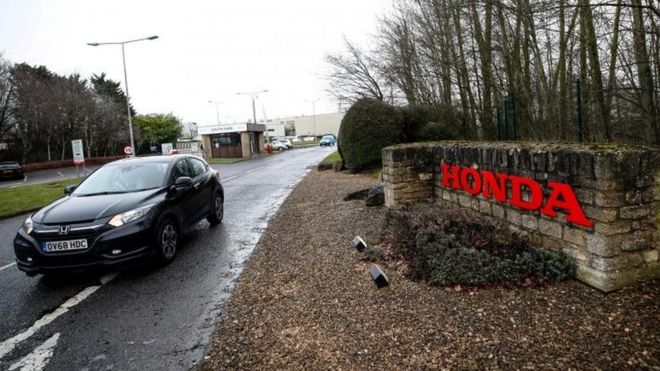 Honda has confirmed it will close its Swindon car plant in 2021, with the loss of about 3,500 jobs.

The Japanese company builds 150,000 Honda Civics a year in Swindon, its only car factory in the EU.

The decision comes just weeks after Nissan switched plans to build its X-Trail SUV from the UK to Japan.

Honda said the move was due to global changes in the car industry and the need to launch electric vehicles, and it had nothing to do with Brexit.

A fall in demand for diesel cars and tougher emissions regulations have shaken up the car industry.

Ian Howells, senior vice-president for Honda in Europe, told the BBC: “We’re seeing unprecedented change in the industry on a global scale. We have to move very swiftly to electrification of our vehicles because of demand of our customers and legislation.

“This is not a Brexit-related issue for us, it’s being made on the global-related changes I’ve spoken about.

“We’ve always seen Brexit as something we’ll get through, but these changes globally are something we will have to respond to. We deeply regret the impact it will have on the Swindon community.”

Mr Howells said that, in the light of changes in the industry, the company had to “look very closely” at where it was putting its investment. “It has to be in a marketplace of a size for Honda, where it makes investment worthwhile.

“The conclusion coming out of that is that that doesn’t include Swindon – the relative size of the marketplace in Europe is significantly different.”

Honda said it would begin consulting immediately about the proposed closure with potentially affected employees.

A union source told the BBC that Honda had sent the workforce at its Swindon factory home for the day.

The EU and Japan recently struck a trade deal which lowers tariffs on both parties’ car exports to zero.

BBC business editor Simon Jack said the trade deal means there is a dwindling rationale to base manufacturing inside the EU.

He said production at Swindon had also been in decline for some time, with the plant currently running at about half its capacity.

He said he would convene a taskforce with local MPs, civic and business leaders, as well as trade union representatives, to help Honda workers get new skilled jobs.

“The automotive industry is undergoing a rapid transition to new technology. The UK is one of the leaders in the development of these technologies and so it is deeply disappointing that this decision has been taken now.”

“Given the size of the operation, there will be a wide and diverse network of regional suppliers that will now be hugely concerned about their future business prospects.

“Employers, government and local authorities must do all they can to deliver tangible assistance and guidance for the people and communities that will be affected by an announcement of this scale,” they added.