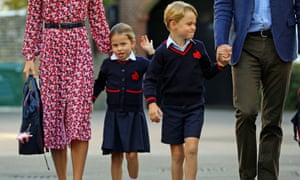 On Tuesday, children in Niagara, Canada, arrived up to 30 minutes late for class on the first day of the new academic year due to delayed school buses. The region’s head of student transportation services laid the blame not on traffic or lost lunchboxes, but parents taking back-to-school photos of children boarding their buses. “It’s a lot of parents and drivers greeting each other – but also the photo opportunities,” Lori Ziraldo told the Welland Tribune.

Along with Halloween and the first day of the summer holidays, back to school has become a photo moment to share on social media. The phenomenon is bringing other countries in line with France, where la rentrée marks the end of a long August holiday. This week, the television presenter Holly Willoughby and the actors Jessica Alba and Busy Philipps all posted images on social media of their children on their first day back at school. In the US, the spectacle extends into the college years: last month, the rapper Busta Rhymes posted an image of his goodbye kiss to his 18-year-old son, Trillian, in the corridors of Lincoln University in Pennsylvania.

Back-to-school shopping is accompanied by a wholesome fanfare of well-drilled family life, fresh starts and good intentions. September has long been known as “the January of fashion”, when a new look brings shoppers to stores, but concerns about sustainability and the fading relevance of the biannual catwalk cycle have diminished the once-mighty lure of new trends. The weakening appetite for fashion in its more frivolous forms has pushed consumers towards the more sensible framework of back to school, which has become big business, rising up the ranks of seasonal shopping events to outpace Easter and Mother’s Day.

Back-to-school shopping in Britain was worth more than £1bn in 2018, according to the market research company Mintel – a year-on-year rise of 27% – and the appearance on social media of doorstep photos of too-big uniforms, boxfresh white socks and pristine book bags has become a familiar visual marker of the arrival of autumn.

Along with a higher pop-cultural profile, back to school now comes with an increasingly lengthy shopping list – for parents, as well as children. The rise of flexi-working and freelancing has allowed for more working parents to make school-gate appearances, raising the stakes on power dressing at drop off. The popularity of “mummy bloggers” such as Erica Davies of the Edited as a major driver of high street sales has reoriented fashion towards outfits tailored for the school run. The fashion choices of the Duchess of Cambridge and Sienna Miller on this week’s school runs – a Michael Kors silk dress and a Mango coord, respectively – were widely reported on in the media. Recent research by eBay UK suggests that British mothers spend £425m a year on school-run fashion, with an average outfit costing £70.

But a backlash against back to school “spam” hit Justin Trudeau this week, after the Canadian prime minister tweeted a photo of himself and his wife holding hands with their rucksack-toting children, wishing them a happy new school year. The hashtag #TrudeauMustGo trended as he was derided for attempting to use his family to distract voters from his political woes. Meanwhile, research by the cybersecurity company McAfee found 53% of parents post back-to-school photos online, raising concerns about privacy. Surrey police this week released a video with guidelines for keeping children safe when posting photos on social media, including obscuring school uniform badges and ensuring faces of other children are not visible.

The Ethical Answer To Fast Fashion Is At Your Fingertips